The history of Bihar is one of the most varied in India. Ancient Bihar known as Magadha, was originally known as ‘Vihara’ meaning monastery, was the center of power, learning and culture in India for 1000 years. Bihar is landlocked state and located in the eastern part of India. It is bounded by the country of Nepal on north, by Uttar Pradesh on west, by Jharkhand on south, and by West Bengal on east.
Magadha, the modern Bihar, had been the centre of the great dynasties of Maurya and Gupta, Pala. Buddhism, Jainism is one of the most popular religions of the world arose from here. Prince Siddharth got enlightment in Bihar and become Buddha, Mahavir also born in Bihar and spreed the knowledge of piece and unity in world. Bihar is one of the first democracies of the world which founded by Lichhawi 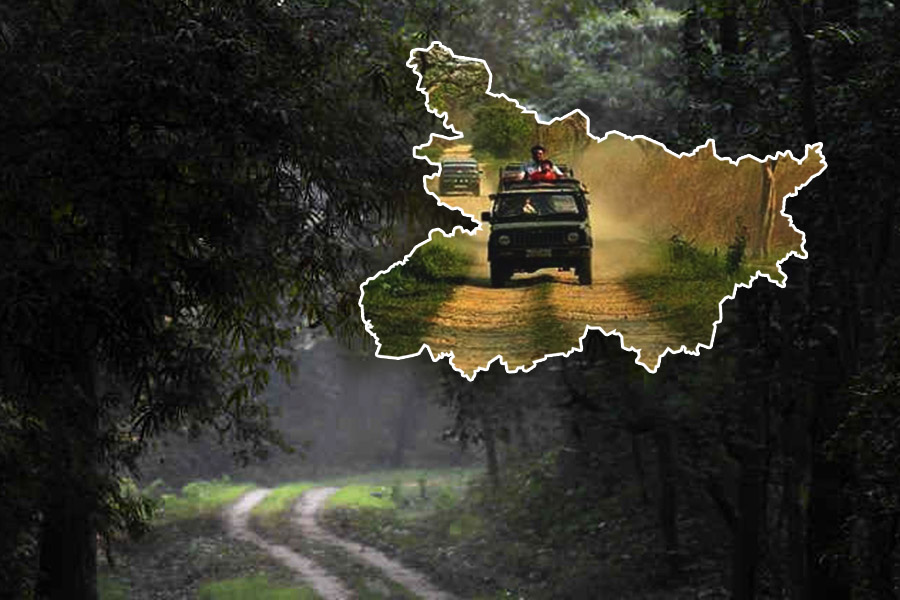 Previous
Next
More Click Here
Bihar has been a great religious centre for Hindus, 83% of the population associate themselves with Hinduism. The second major religion in Bihar is Islam. Followers of Buddhism, Jainism, Sikhism and Christianity are existent in Bihar, but their number is very low

The land where Arthasastra was written, where Chanakya set the intricacies of statecraft much before a certain Machiavelli was born, Bihar led the march of modern civilization creating in this quest a treasure of art, culture, pilgrimage sites and cuisine.

Buddhists, Jains, Sikhs, Muslims, Christians, and Hindus followers of each faith have made Bihar a beautiful cultural kaleidoscope.

The Jain Jal Mandir at Pawapuri, the Buddhist monasteries at Rajgir and Bodhgaya, the Vishnupad Temple at Gaya, the Shiv Temple at Areraj in East Champaran, the Cathedrals in Patna and Bettiah, the mausoleums dotting the Sufi arc from Patna to Sasaram and the Harmandir Saheb, Guru Gobind Singh’s birthplace, at Patna sahib, are all where the faithful find peace with themselves and the world.

In Champaran, step into Gandhi’s cradle of non-violent revolution – Ahinsa and Satyagraha. Motihari the headquarters of the old Champaran district, chance upon the birthplace of one of the greatest writers – George Orwell.

At Nalanda and Vaishali, the Vishwa Shanti Stupas are two landmarks no visitor would like to miss, Just as the remains of two of the world’s oldest universities at Vikramshila, near Bhagalpur, and at Nalanda. In 1951, President Rajendra Prasad, himself a luminous son of Bihar, opened the Nav Nalanda Mahavira, which is a modern seat of learning for ancient Pali and Brahmi language.

For the academic tourist, Bihar is a gold mine. Not only the archaeological remains, but also the vast text from the ancient to modern times in various archives and libraries provide a rich source of knowledge to understand and interpret the march of modern civilization, the seeds of which germinated in abundance in Bihar.
Bihar has a rich tradition of songs and dances. The dance forms of the Tharu tribals along the Nepal border in West Champaran, as also their handicrafts, remain largely unseen to the outside world.

From the Nirguna music form to the Dhrupad gharanas of Amta and Bettiah, Bihar has maintained its melody. Ustad Bismillah Khan, the Sehnaai maestro, is from Dumraon in Bihar.

Bihar also has sites of eco-tourism at Bheembandh, The call of the wild in Valmiki Tiger Reserve at Valmikinagar, the sight of birds nestling at the Kanwar lake, The dalliance of colours with mythology and tradition on mud walls and canvases of Mithila painters, the surprise element of legends with little known destination in Bihar offers each of these in plenty. And much more. 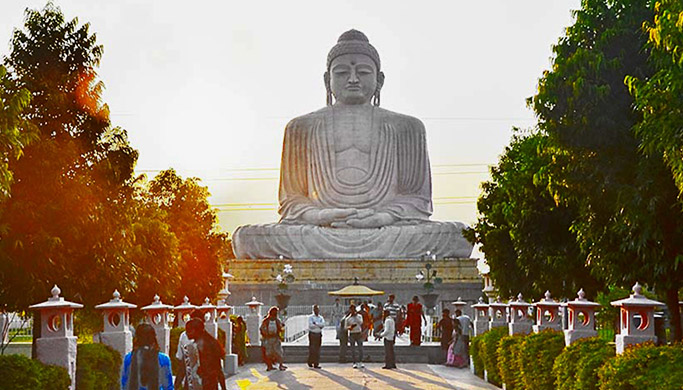 The state’s vast and varied Diaspora in the United States narrate stories of how Yoga gurus have marketed themselves overseas with their mad scramble to patent sundry ‘asanaas’. What a pity, spending princely sums for instant deliverance from the pains of the body.
If you are looking for a Yoga school, take the next flight to India, then to Patna and then take a train to Jamalpur. Twenty minutes by road from there, you will reach Munger which is the only Yoga university in the world.

The historic fort city by the Ganga, beckons those seeking health in a peaceful retreat.

The state is festivity unbound. Festivals are celebrated with gaiety right through the year. In recent times, with the outward expansion of the Bihari diaspora, Chhath, the festival dedicated to Sun God, has found its way to the seashores of even Mumbai.

The tradition of Sama – Chakeba, where young girls make dolls of mud and straw and sing and dance in the early winter evenings. The joyful song-dance while women plant paddy saplings at the break of the mansoon, the banter of wedding songs, all these have helped keep life in Bihar in old world’s innocent bliss. You just cannot miss the love in the air. It reflects on the hospitality too. The traditional ‘Hori’ from Bhojpur also very famous in Bihar.

If you are looking some different sweets to eat which is both sweet and salty, is awesome. First the sweet nothing – Patna’s ‘Anarsa’, Gaya’s ‘Tilkut’, Silao’s ‘Khaja’, Maner’s ‘Laddoo’, imarti and Lai. Not for nothing do Biharis vouch for their sweet delicacies. Bite into these sweets and you will discover how Biharis are such sweet people and the state such a sweet land.
You also try out ‘Makhanas’ in Darbhanga and Madhubani with sugar a fine snack, and stirred into ‘Kheer’ with milk, an Aha dessert.

If you wish for some takeaway fares, buy ‘Chura’ or flattened rice of the Katarni Variety from Bhagalpur or the Marcha ‘Chura’ from Champaran and savour them with sugarcane jaggery.

A very famous cuisine of Bihar is ‘Litti Chokha’ it’s attached with Bihar. ‘Litti’ a wheat flour roll with a filling of gram flour and spices roasted over slow cowdung fire, is a meal any trueblood Bihari goes miles to eat. Served with ‘Chokha’ or mashed potatoes/ brinjals with coriander, green chillies, garlic and onions baked over slow fire.
If you are non-vegetarians thus ‘litti’ with mutton curry is another favourite combination.
‘littis’ are popular both as street food and also as delicacies served at upmarket parties, talking of street food, almost every place boasts of some special cuisine.

Bihar is only the state which count in each and every sector, from corporate badshahs to captains of industry and bureaucracy, you will find Biharis all across the globe – From the World Bank to NASA, from the micro-specialist surgeon to the academic in your neighbourhood university and writers. Just cross check with any at random you will know we are not spinning a yarn here.
We proud on Bihar, Get inspiration to VISIT BIHAR.

Bihar has often called a holy or sacred land because from the earliest time of recorded civilization, great religious teachers and holy men made this land their home. This is where the seeds of the first republic were sown and the first democracy evolved from it. Great wise and learned men helped spread knowledge and enlightenment across India and World. Today most of these places have kept the great traditions alive and are a treat for both the devout and the traveler seeking different experiences. Buddhism, Jainism, Sufism, Sikhism, Hinduism made Bihar a beautiful cultural kaleidoscope. We at “Visit Bihar” have good set of experienced travel professional that can help you to design and plan your memorable tour and provide all travel assistance throughout Bihar.

Centuries ago, a child was born in royal kingdom who later gave the world a new way of life, which would release their inner conflicts, problems and suffering and help them lead a life full of peace and contentment. Prince Gautama Siddhartha renounced everything’s to search the essence of life and came to Bihar, India. And Bihar is where he found what he was looking for – enlightenment. From then on, the Buddha explored this beautiful country, discovered the middle path, preached to his disciples and finally attend Mahaparinirvana. It is believed that the Buddha wanted every Buddhist to visit the four places that were significant in his life.

The Cradle of luminous Jain Spiritual souls lies in Bihar. Bihar is the sacred destination as the birthplace of the 12th Tirthankar “Vasupujya” and 24th Tirthankar Mahavira. Their non-violent ascetic path became very popular and become one of the prominent religions of India. According to Jain tradition Vardhaman Mahavira born at the locality called Kundalpur and attained Nirvana at Pawapuri (near Rajgir). In today world a tourist may explore the places associated with the life and preaching of Vardhaman Mahavira and other Jain Tirthankar in Bihar with a rich legacy and with beautiful temples.
We have a set of experience team, who assist you during your spiritual visit of Jain Circuit.

Bihar has been one of the earliest places in the Indian Sub-Continent where mystic Sufis had settled. The most important of all the Sufi orders in Bihar, however, was the Suharwardia, particularly its sub section, the Firdausia Silsila. One of its most celebrated saints was Hazrat Sharafuddin Ahmad. He was born in Maner 1262 AD and he died in Biharsharif in 1377 AD.
The advent of Sufism in Bihar and its adjoining areas also led to the mushrooming of mosques and “khanqahs” of element Sufi saints and preachers. These became centers of learning. In fact there are hundreds of holy places associated with Sufi saints in Bihar where Sufism is still a thriving tradition and many important Sufi centers still continue to flourish.