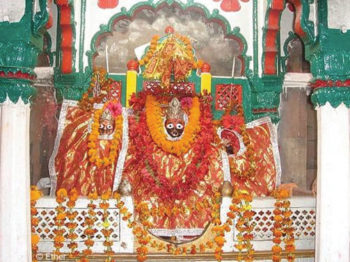 Visit Bihar offer you a tour for Patna, Bihar.Patna is one of the oldest cities in India. The name Patna is popularly believed to be derived from Maa Patan Devi Temples. Patan Devi temple, which is located at Gai Ghat, Patna City.Patan Devi in Patna is one of the 51 Shakti Pitha in India and is a very sacred holy shrine for the Hindus. It is believed that the right thigh of Devi Sati had fallen here according to the Hindu Mythology, the remaining part fell to 50 other places across the country.It is said that three statues of goddesses Durga, Laxmi and Saraswati were found in a ditch behind this temple which is set up in this temple now. Compared to the Choti Patan Devi temple, it is bigger in size but both the temples have almost equal historical importance for Hindus. Not only Patna people but devotees of several parts of the world do not forget to visit here to get their wishes fulfilled.Being a Shakti Pitha, it is visited by a large number of people. During Navratri and Ram Navami, thousands of people visit to worship the deities and a fair is also held nearby. A number of shops are present near the temple from where one can buy Prasad and other offerings for the deity. Patan Devi is the most sacred temple in the city.

The temple of Bari Patan Devi faces to the north. At the entrance of the temple, there is a portico of about 1, 5′ x 15′. After that, there is a room of about 8′ x 8′ for goddesses namely, Mahakali (12″), Maha. Lakshmi (6″), Maha Saraswati (12″) and Bhairav (3″). They are in a standing pose on a simhasan, which is about 4″ square, the height being about 7 feet. All the statues are of black stone.They are attired in sari except for Bhairav. They are with mukut (crown). Choti Patna Devi temple is to the south-east of the famous Sikh temple of Harmandir, which is the site of the birthplace of Guru Govind Singh. It has the same goddesses as in the Bari Patan Devi. It is claimed by some that the pat or clothes of Sati, wife of Mahadeva, fell from the sky at this place only. In the northern compound of this temple, there is a big image of the Sun-god, though broken into two parts.There are also small images of the Sun-god and of Vishnu and some votive stupas in the western verandah of the temple.Like most of the temples, these temples to have a number of other images. On the right side of the three goddesses and god (and not in their room), there is a statue of Parvati which is made of stone. It is also believed that this statue is one hundred years old. She is also in the Standing pose and located to the north.

How to reach Patan Devi :

Chhoti Patan Devi can be reached easily by rickshaw or any private mode of the vehicle from the Badi Patan Devi temple. It is situated in the same area nearby.